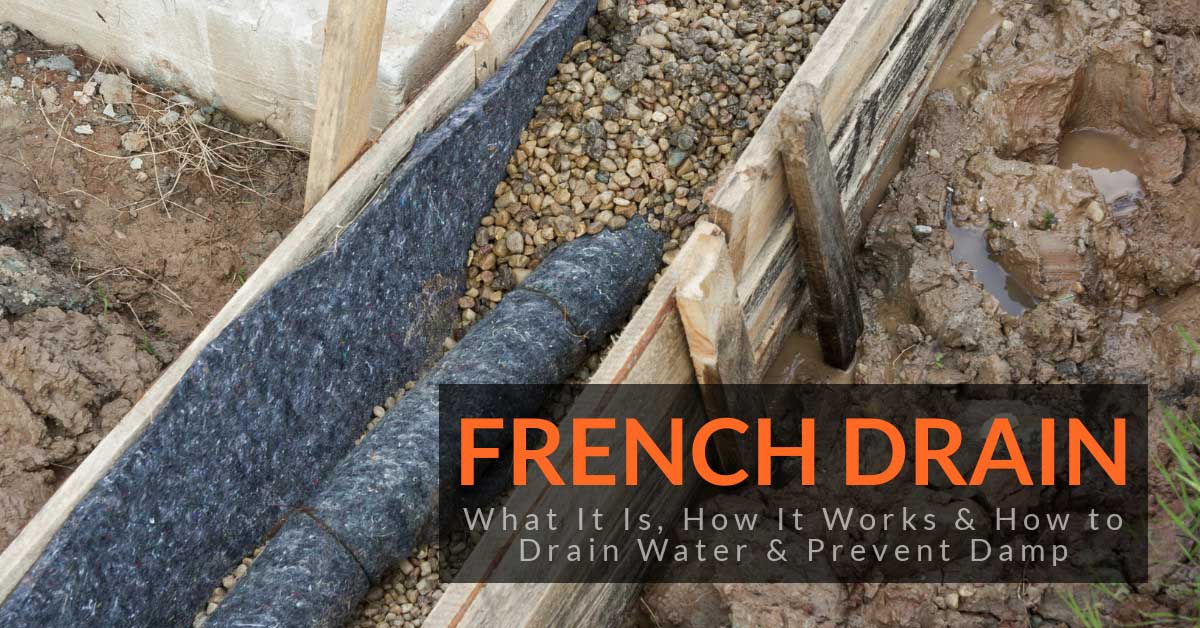 French Drain: What It Is, How It Works & How to Drain Water & Prevent Damp

There is a lot of confusion out there about French drains, their benefits, and how they work.

With that in mind, this article will fill you in on all the finer details and set the record straight once and for all.

Hopefully, after reading this post, you will have a better idea about the concept and whether or not it’s suitable for your project.

There are many different types of drainage system available, and it’s vital that you select the most appropriate one if you want to drain water and prevent damp as much as possible.

Considering that, let’s get down to business.

What is a French drain?

French drains are made of a small trench filled with aggregate that helps to move surface water away from the walls of a property.

Lots of people use them in their driveways or gardens when they know the areas are prone to flooding.

Sometimes surface water doesn’t drain away correctly due to the lay of the land and many other factors.

A French drain should ensure that never becomes a problem because it channels all the liquid away from the building.

In most instances, people fill French drains with stones or other materials so they can’t see the flow of water.

Need help with your french drain? Speak to an expert now:

When is a French Drain Suitable?

You might consider opting for a French drain if you have a wet basement or soggy garden following a prolonged period of rain.

In most situations, people who buy properties that require a solution of that nature will have the use of French drains already.

However, there are instances in which homeowners might want to pay for installation further down the line depending on their circumstances.

If you live in an area that is known to sustain flash flooding from time to time, a French drain could provide you with a lifeline that will protect your house and ensure the rainwater flows in the right direction.

How Does a French Drain Work?

As mentioned a moment ago, French drains ensure any rainwater in outside your property will flow away from the building.

The liquid runs into a gravel trench and then flows into a pipe at the bottom of the drain. The water travels through the tube and then empties somewhere safe away from the house.

It’s vital that anyone who creates a French drain in their gardens makes sure the ditch slopes one inch every couple of feet. That should be enough to ensure the water moves in the right direction and never creates a flooding issue on the property.

In many instances, people who build French drains will send the surface water to a low-lying part of the property, a drainage ditch, or straight into the street.

What is the Best French Drain Strategy for Surface Water?

If you have a lot of surface water outside your home, it’s sensible to install a shallow French drain to ensure it flows away from the property.

You should make sure you dig the drain diagonally across the land to enable gravity to work its magic and move the water away from the house.

That channel should prevent the brickwork from becoming damaged, and it should also remove any chance of mould forming around the bottom of the structure.

When it comes to working out the best size for your French drain, there is usually no need to make it larger than around two feet deep and one and a half feet across. That should be more than enough to ensure the drain can handle any moderate amount of rainfall.

If your drain has to pass through bushes or shrubs, it’s sensible to use pipe for those parts because roots could begin to grow in the channel, and that could stop your drain from working correctly.

What is the Best French Drain Strategy for Flooded Basements?

Lots of modern homes in the UK don’t have basements these days, but there are plenty of houses built before the 1980s that do.

So, French drains are just as critical today as they ever were, and many families could benefit from using them.

If you live in one of the many homes that have basements, you’ll want to make sure that area of the property always remains dry and clean and never gets flooded.

For that reason, you will need to install a deep French drain to channel any rainwater in the right direction.

Deep French drains are also known as footing drains, and they run around the outside of the home at the level of your footing.

The idea is to intercept any rainwater before it can get into the basement and cause damp or mould.

Homes built in locations prone to flooding will often have a drain of that nature installed during the construction process. That is by far the most suitable time to complete the job because it will only take a few hours.

However, you have to work a little harder than that if you want to add a footing drain to a building that’s already complete.

Firstly, anyone who wants to install a footing drain will have to dig around the perimeter of their houses until they reach the foundation footing.

That is usually at least a couple of feet down, and so it might take a while to complete that task. You then need to create a trench in much the same way as you would with other types of French drains.

Sometimes there are issues when it comes to making sure the ditch slopes enough to move the rainwater.

If you can’t get a decent slope, it might make sense to use a pipe to transfer the collected water into a tank or bucket in your basement. You can then empty that item whenever it gets full.

What is the Best French Drain Strategy for Retaining Walls?

Let’s presume for a moment that you decide to build a new structure on your property. You might even want to extend your home by adding more rooms or something similar.

You want to do that, but your house is on a hillside, and you worry about making sure the brickwork is stable enough to stand the test of time.

In many instances, retaining walls on slopes will become damaged, and compromises by water build-ups as rain flows down the hill.

The last thing you want is for the liquid to hit your wall and stop because that will cause flooding and many other issues.

So, it’s sensible to dig a French drain behind the wall and channel the water in the most suitable direction. That should ensure the construct maintains as much structural integrity as possible.

Of course, there is a decent chance French drains of that nature could become clogged with silt and other rubbish over time.

If you want to prevent that from happening, you just need to cover the footing with a specialist cloth. You can pick that up at most landscaping stores and online retail sites.

What is a French Interior Drain?

There are instances in which professionals will advise you to install a French interior drain, and this section will highlight how that concept works.

Sometimes it’s too complicated to dig a footing drain around the exterior of a property. So, people decide to use an interior structure to catch water as it enters their basements rather than preventing it from coming into the room.

That approach usually works a little better than footing drains, and it’s preferable if you want to make sure your basement remains dry at all times.

The only issue is that some homeowners will have to remove walls to create the system. For that reason, French interior drains are always best left to drainage experts.

The professionals you select will come to your property, enter the basement and cut a channel in the floor. They will then lay a pipe all the way around the perimeter and add a collection tank.

Usually, the specialists will fix that tank into the floor too for the best outcomes. When it starts to rain, water will flow into the collection tank, and then a sump pump pushes the liquid to a safe place. That is usually towards the bottom of your garden or the street outside.

If French Drains Can Use Pipes, Which Pipes Are Best?

In most instances, the pipes professionals use for French drains are six inches in diameter and perforated.

However, when selecting the best products for your project, it’s sensible to consider the volume of water you intend to channel away from your property.

In some extreme cases, you might need to use the large-size pipe if the area is prone to flash flooding.

Depending on who you ask, some professionals say they prefer smooth pipe, whereas others will always use corrugated solutions. Both options seem to work well across the board, so that’s probably got more to do with personal preference than anything else.

Just make sure you use some fabric to prevent clogging as much as possible and also work hard to maintain a suitable angle when creating your slope.

They are the only two issues that could ruin the entire job and leave you with a French drain that doesn’t work as expected.

Indeed, those who fail to create a steep enough slope might even draw water towards their properties, and that could become disastrous if a storm hits.

What Sort of Gravel Should I Use in French Drains?

When it comes to selecting the best gravel for your French drain, it’s wise to choose three-quarter inch washed and crushed stones.

You can buy some slightly larger ones if you think it will work better than that recommendation. However, ensure that you use soil around your pipework because the last thing you want is for the crushed stones to damage the plastic after many months of sitting under the ground.

You need to protect it with soil if you desire the French drain to last for many years. You can then place lots of gravel on top of the earth and at the sides to ensure it filters out any sediment as the rainwater moves away from your home or building.

What is a Geotextile Filter?

A geotextile filter helps to protect the pipework used in your French drain.

You need to wrap all your crushed stone to ensure it doesn’t rub up against the pipe and wear it away creating leaks. The material will also prevent unwanted things from falling into the drain and clogging it up.

So, if you’re going to dig and build a French drain without the assistance of professionals, it’s vital that you search online for the best geotextile filter materials on the market.

Those items are going to ensure your drain remains in working order for much longer than it otherwise would have done, and they should also boost the performance of the French drain.

Can You Lay Out Each Step I Need to Follow?

Yes! Installing a French drain is straightforward in most situations, and while the experts won’t charge a fortune, some people might like to try the concept themselves. If you wish to do that, just follow each of the steps outlined below, and you should end up with a working French drain on your property.

Now you know everything there is to know about French drains and how they work, you should have enough information to determine whether or not that concept is suitable for your drainage issue.

If you need assistance with any part of the process, just get in touch with the Drainage Specialists at BDS Drainage and let them work their magic.

French drains are still excellent solutions for draining water and avoiding flooding, and you should never overlook their benefits.