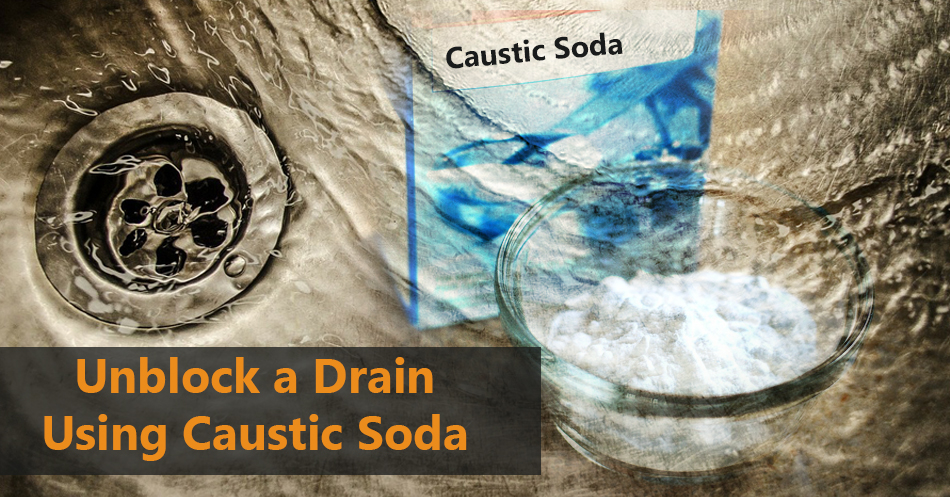 How to Unblock a Drain Using Caustic Soda?

Although fairly common, a blocked drain is enough to drive most people to their wit’s end. An obvious recourse in such cases is to call on the plumber and while that’s a sensible option, there are certain things that you can do yourself to unblock a drain.  The vast majority of blocked drains are caused by jammed up debris like hair, food particles and other unwanted materials. Natural drain cleaners are often ineffective at removing this debris completely, which means chemical-based cleaners are your best option. Here we look at one such cleaning agent, caustic soda, and how to use it to unblock drains in your house.

Need help unblocking your drain? Speak to an expert now:

What is caustic soda?

The chemical name of caustic soda is sodium hydroxide (NaOH) and it’s also known as lye. The name caustic soda is derived from the material’s origins as a sodium hydrate and it’s called caustic because, well, it’s highly corrosive in nature. It’s the last bit that is of most interest when we talk of unclogging blocked drains.

Caustic soda causes a chemical reaction when it comes into contact with organic materials like dirt, food, hair etc. These are also ingredients that account for a majority of drain blockages. Caustic soda can also be easily dissolved in water, which is one reason why many drain cleaning services use it as the first line of offence in the battle against blocked drains. Commercial grade cleaners, however, have a higher concentration of caustic soda compared to the ones meant for domestic use.

How to use caustic soda for cleaning & unclogging drains?

In its purest form, caustic soda is available as a white coloured waxy solid. However, it’s the powdered or liquid form that is used for clearing a blocked drain. You can buy powdered/liquid caustic soda at any neighbourhood hardware store. Once you’ve bought it, follow the below-explained steps.

Although highly effective, using caustic soda to clear blocked drains is not without its share of challenges. The biggest risk it poses is to your health and safety. Caustic soda’s corrosive nature, while a boon when trying to get rid of difficult blockages, can lead to vision impairment. At the very least, direct contact can create a burning sensation and swelling in the eyes and the skin. The consequences of ingesting it are far more serious. From chemical burns to gastrointestinal ulceration and even death, caustic soda’s effects on health can be devastating. If you have decided to use caustic soda to clear a blocked drain, do so after wearing full protective equipment. When you are done using the caustic soda, secure it properly and store it out of the reach of children.

You can procure caustic soda from most hardware shops or stores that specialise in selling commercial-grade cleaning products. The concentration of the caustic soda sold by these stores ranges from 50% to above. However, you don’t need such a high concentration to dissolve the average drainage debris. But if you still intend to buy highly concentrated caustic soda, be careful of its corrosive nature and use and store it appropriately.

If you are faced with a blocked drain, do not go for caustic soda as the first measure. Most drain cleaning products contain just enough caustic soda to get the job done. Periodically using these products is more than adequate to keep your drains flowing freely. Having said that, do consult a professional plumber once before buying high concentration caustic soda if conventional drain cleaning products fail to clear your drain blockage. Often, the risk of using something like caustic soda far outweighs the price you’d pay for a professional and efficient plumbing service.

Still Struggling to unblock your drain?

Get a free quote from a professional expert by entering your details below: