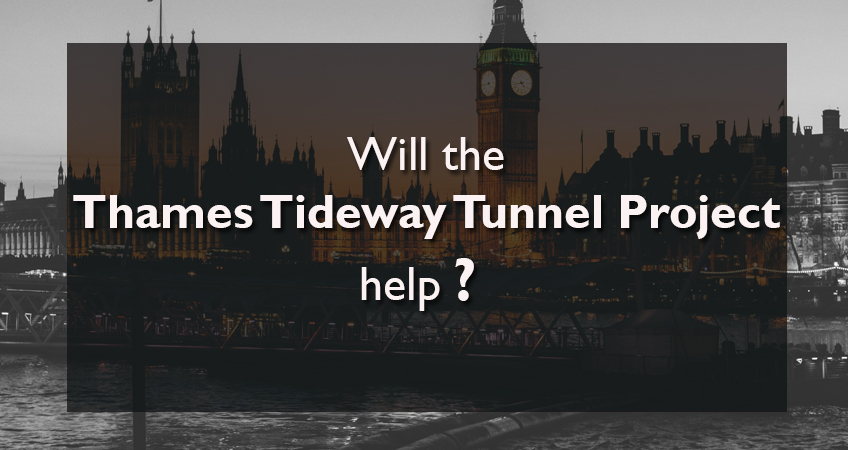 All about the London Thames Tideway Tunnel Project

The Thames Tideway Tunnel is easily among the most important civic projects taken up in the history of London. Also known as the ‘super sewer’, the Thames tunnel in London has been designed to accommodate the sewage that overflows into the Thames. The size of the tunnel has been a talking point among the London residents. Once finished, the tunnel is expected to be over 7 metres in diameter, 25 kilometres in length and up to 65 metres deep.

The Thames Tideway Tunnel map (you can find the full map here) will chart a course that begins from Acton and stretches all the way up to Stratford’s Abbey Mills Pumping Station. More importantly, and this is where the engineering complexity of the London tunnel project becomes apparent, the tunnel will almost entirely be under the Thames river. It will also link to the other major London public works project, the Lee Tunnel. No wonder then that the Thames Tideway Tunnel news has been dominating the airwaves of late.

Environmental experts agree the new London sewer will be a lifeline for the Thames, and the flora and fauna it is home to. Several million tonnes of sewage are released into the Thames almost every week, which has caused the river’s pollution levels to rise alarmingly.

But how exactly will the Thames Tideway Tunnel project help? Why are things the way they are now? How much will this tunnel cost the taxpayer? For answers to those and many more questions, read on.

Why does London need the tunnel?

The new Thames tunnel is needed because the current system falls short of London’s requirements. The existing system consists of several sewer lines running underneath central London. Apart from regular waste water, storm water also drains into this system. This is mostly not an issue, except when there are very heavy rains. Heavy rains cause the sewer lines to become full quickly, thus leaving little to no space for regular waste water. But rather than flooding streets and entering homes, this waste water is channelled towards the Thames by an overflow mechanism.

This overflow mechanism comprises close to 60 CSO (combined sewer overflow) sites through which excess sewage water flows into the Thames. These sites, and the entire London sewage system, date back to the Victorian era. Back then, the engineers expected the sewer system to overflow no more than 10-12 times in a year. Today, however, the system overflows into the Thames almost 60 times in a year. These CSOs do not just contaminate the Thames beyond acceptable limits but also put London in violation of the EU’s Urban Waste Water Directive.

But why do the sewer lines overflow often?

The reason for the frequent overflow of the sewers can be divided into two parts. Firstly, the amount of waste water flowing into sewer lines from London’s homes has been increasing over the years. Secondly, there has also been an increase in the amount of water that enters sewer lines during heavy rain.

More waste water is a result of London’s increased population. Constructed in Victorian times, the London sewer system is capable of handling only half the city’s current population. However, there is also another aspect at work here. London has grown tremendously and extends over several new suburbs that use their own sewage systems, i.e. a growing population is only one reason for the increased overflows from London’s CSOs.

The other reason is that London has been massively paved over in the last hundred years or so. This, along with disappearing green spaces and dried-up natural water streams, has led to a situation where very little water seeps into the ground. Earlier, it would take a really big storm for the water to enter the sewer lines and cause an overflow into the Thames. But now, even a mild spell of rain causes the London sewers to fill up quickly and run-off into the Thames.

How will the new tunnel help?

The Thames Tideway Tunnel route is designed to capture sewage from over 30 CSOs before it drains off into the Thames river. The discharge point of each CSO will be linked to the new Thames tunnel, which ensures the waste water will not end up in the river. After capturing the waste water, the tunnel under the Thames will pump it to the Beckton sewage treatment plant. The clean water obtained after treating the sewage will then be discharged into the Thames.

Are there any other benefits to the Thames tunnel?

London’s existing sewer system is of 19th century vintage. Its population back then was roughly two million. Today, the number of permanent residents in London has long crossed the eight million mark and the day where it becomes ten million is not far away. Simply put, the existing sewer system is not capable of dealing with the city’s sewage needs on its own.

Moreover, the ill-effects of untreated sewage released into the Thames are manifesting in various ways with every passing day. Several hundred cases of pollution incidents are reported every year. It is not unusual for rowers and other recreational users of the river to complain of infections and illnesses because of the polluted water.

The pollution also affects the river’s flora and fauna in a major way. The untreated sewage, especially during summer storms, can lower the water’s oxygen levels which can lead to thousands of fishes dying.

This is where the Tideway tunnel comes in. By intercepting the sewage that would have otherwise ended up in the Thames, the London Tideway tunnel will lead to a cleaner and healthier Thames.

The project is also generating a lot of jobs. More than 4,000 Thames tideway tunnel jobs are expected to be created directly. A cleaner and livelier Thames will also have a positive impact on the tourism industry. The local fishing industry will be another beneficiary of the project as the river will retain its status as one of the principal nursing areas for several North Sea species.

It’d be safe to say that the Thames Tideway Tunnel project will affect the life of every Londoner in a meaningful way.

How much will this cost?

As one of the city’s largest and most complicated public projects, the Thames sewer is bound to cost a fair bit. The final Thames tideway tunnel cost is estimated to be around £4.5 billion. Thames Water, which is the company that fulfils London’s water and sewage treatment requirements, is passing on this cost to its customers. London residents can expect regular increases in their water and sewage bills up to the year 2020.

However, Thames Water is not building the tunnel. Instead, it will be built by the Tideway Company. Thames Water, as such, will pay Tideway to build, operate and maintain the new Thames Tideway Tunnel.

When will the tunnel be ready?

The Thames Tideway Tunnel construction is already underway. The plan got regulatory approval back in 2014 while the finance for the project was secured a year later in 2015.

The Thames tunnel construction itself began in 2016. The actual tunnelling work (using tunnel boring machines) started in 2017. Building the entire tunnel and other associated works is slated to be completed by 2023.

BDS Drainage is a business that offers various drainage and plumbing related services in London. Over the years, as we helped clear blocked drains and execute projects that involved gutter cleaning in London, we often lamented how the city’s functional but old sewage system could use a nice shot in the arm. The Thames Tideway Tunnel is exactly that and promises a better future for London’s residents and the River Thames.