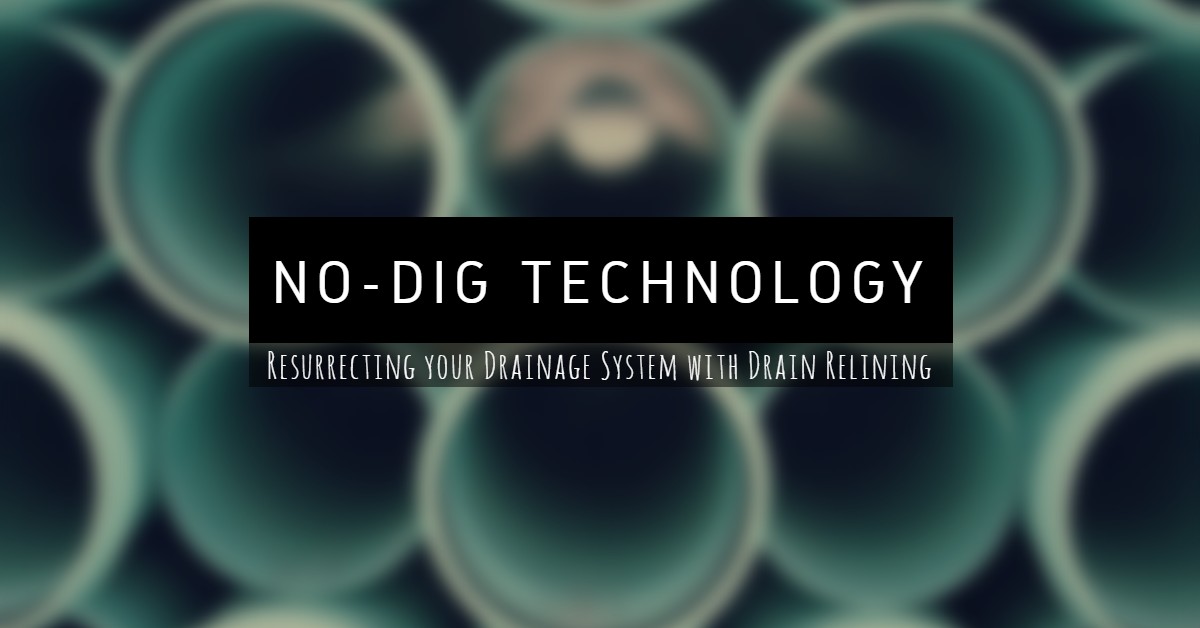 What is No Dig Technology: Resurrecting your Drainage System with Drain Relining

Leaking drains are a serious household problem. Even the smallest of leaks can cause damage to building work and the foundations.

In some cases, the increased waste may also lead to increased operational costs.

That is, of course, unless you know how to avoid expensive treatments. Drain relining, also known as no dig technology, is often the perfect solution.

It’s one that brings many benefits over some of the more traditional options. Here’s what you need to know about the process.

Need help with drain relining? Speak to an expert now:

What Is No-Dig Technology?

In essence, drain relining (no-dig technology or trenchless) is a process that involves creating a new internal wall for the affected piping. This makes the system leakproof while sacrificing only a tiny percentage of the maximum flow levels. Better still, it does so without needing to replace the broken or faulty piping.

Ultimately, this means that the procedure can save both time and money. Best of all, the project can be completed without the need to dig around in search of the broken parts. So, aside from being a better solution due to the direct benefits, there are plenty of indirect rewards to consider too. After all, nobody wants to be left with the clear up jobs that result from intrusive digging.

How Are Drain Relining Processes Completed?

Drain relining is a job composed of several stages. The first is to locate where the leak is occurring. The clear signs will give you a fairly accurate estimation, but you must pinpoint the exact location. Doing this without digging may seem impossible. Thankfully, modern tech allows us to investigate the drainage system with CCTV cameras.

This step doesn’t only look for the source of the leakage. It also surveys the drain pipe to check the severity and size of the problem. Once this data is available, making a decision as to whether relining is suitable becomes easy. In many cases where the affected areas cover a space of centimetres rather than metres, relining is ideal.

Before fitting the new piping wall, the surface needs to be cleaned with a high-pressure water jet. After all, the gunk and junk that has accumulated could make it difficult for the new lining to take. Frankly, this preparation part of the process is vital for the success.

A new bladder is then inserted to cover the source of the leak. This is then inflated so that it can bond with the clean pipe surface to become a sealant. This creates a new internal wall for the pipe, stopping all leaks and preventing further damage to the previously affected area.

Once the new bladder is in place, cameras will be used to check that the entire leak is covered. Moreover, we’ll test to see that water can flow through the fixed piping without disruption or leakages in other parts of the system.

Upon completion, the drainage system will have been restored to its former glory without the need to dig up the land or replace an entire pipe. Perfect.

How Long Does It Take?

Many homeowners assume that the process of running a survey and then completing an intricate job would take an age. Surprisingly, though, the entire job can often be completed within a couple of hours. This includes every step from investigations to reviews.

This is great news for the cost as well as the hassle. It’s not always the best process for faults in larger parts of the drainage systems. As for the leakage issues caused by smaller cracks and faults, though, it’s not hard to see why it’s so popular.

Do I Need To Know Anything Else?

The drain relining process isn’t only a great way to fix leaks. The CCTV surveys will spot building blockages, which can then be rectified before they turn into a serious problem. This is another fantastic reason to choose no dig tech facilities over alternative fixes.

Assuming the relining process goes to plan, the results will last just as long as any normal pipework. So, it might eventually succumb to general wear, but it isn’t a short-term fix. Relining is a non-intrusive plumbing solution that is built to last.

As for other enquiries, why not speak to us directly by calling today. Here at BDS Drainage, we’ll be happy to talk you through the process and discuss any questions you may have. But if you have a minor leakage in your drainage system, it’s safe to say that no-dig technology is an option worth considering.