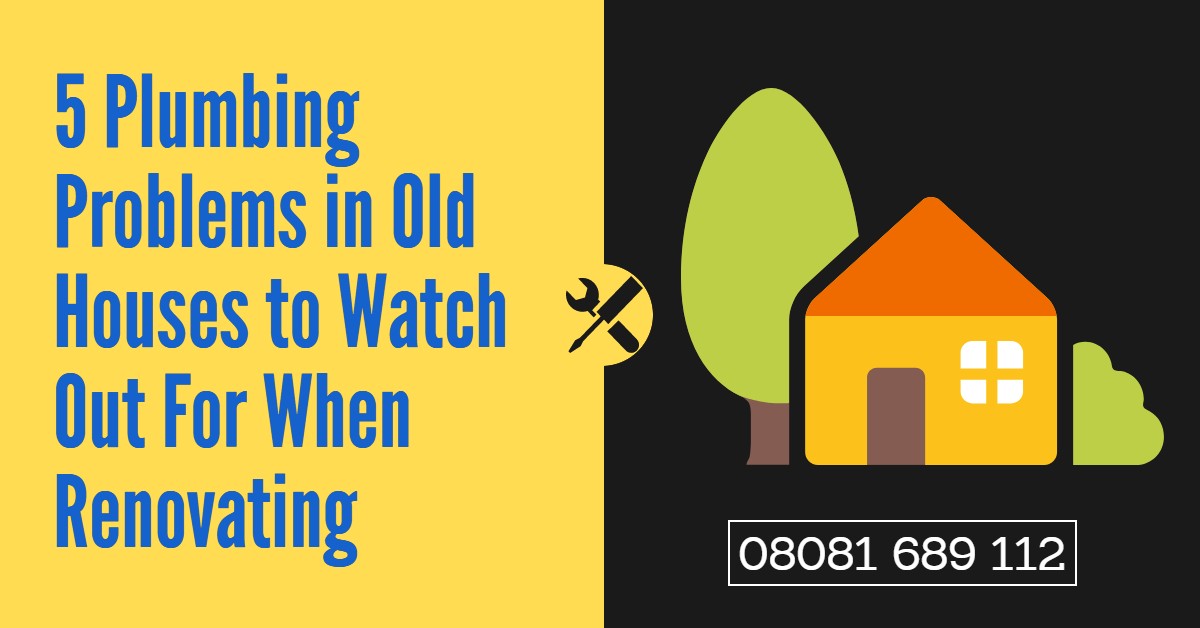 Got an old house? Thinking of making a few friendly home improvements?

One of the biggest obstacles when renovating, especially when extending or knocking down walls, is the plumbing.

In an old house, a few renovations may also reveal plumbing problems you never knew existed.

As the years have gone by, many previous plumbing practices have become outdated due to being less reliable (and in some cases less safe!).

Renovating could be a chance to replace some of this prehistoric plumbing, saving you the hassle in the future.

Here are five of the main problems worth looking out for.

Between 1978 and 1995, a new material known as polybutylene started taking households by storm. It was heralded as the pipe of the future, being extremely cheap to make and install.

However, the hype didn’t last long as thousands of pipes suddenly started to bursting. It’s believed that chlorine in public water was reacting with the pipe and making it brittle. The material is no longer used, but there are many homes that still contain it.

Need help with plumbing problems? Speak to an expert now:

Many old metal materials used in piping have since become outdated. The most notorious, found in buildings constructed before 1970, is lead.

Having found to be extremely poisonous, it’s worth getting lead piping removed straight away – tiny flakes could be coming off and poisoning the water supply. The material has been banned, and whilst it has been removed from most homes, some properties may still contain it.

Galvanised steel piping has similarly not been used since the 70s. This is not due to health dangers, but simply due to the fact that it easily corrodes.

This can have one of two results, either springing leaks by eating away at the pipe or causing rust deposits which block the pipe and reduce the water pressure.

Old iron piping can have the same effect. In such cases, getting this removed and replaced with copper or plastic could be beneficial.

All fixtures have a set lifespan after which they start to wear away. This depends on the material and type of fixture.

Copper pipes can last for up to 80 years, whilst PEX pipes can corrode after 40 years. Some water heaters may need to be replaced within 10 years, whilst sinks and toilets may be capable of lasting up to a century (although it’s unlikely people will keep onto such units for as long).

If you suspect a pipe or other fixture to be old, it could be worth looking into its lifespan – a replacement could be in order.

A dodgy water heater is a serious concern. It could burst and overflow the house, soaking electrical cables and causing electric shock and fire risks. It may even be leaking carbon dioxide.

Common installation errors to look out for include no TRP valve drain pipe, no catch pan, unprotected electrical cables and inaccessible circuit breakers.

It’s worth getting someone to look at your water heater to check that it is safe and fully working. Water heaters should ideally be replaced every 10 to 20 years, but there are some homeowners who may be operating on ones much older, potentially installed by a DIYer or a plumber back when water heaters laws weren’t so stringent.

There are plenty of dodgy DIY repairs that can cause havoc on your home. They may likely have been from previous homeowners. As a rule, fewer of us partake in DIY tasks nowadays than in previous years when it was commonplace. This isn’t to say that generations past were always better at DIY – in fact DIY piping disasters may be more common in older homes.

You should look out for oddly mismatched piping materials, traps installed backwards and amateurish attempts to secure pipes with rope or duct tape – all this is clear signs of a dodgy DIY job from a previous owner.

Get a professional to fix up this piping so that you know it’s going to last. It’s likely you’ll already be getting odd noises and pressure problems from these plumbing blunders.