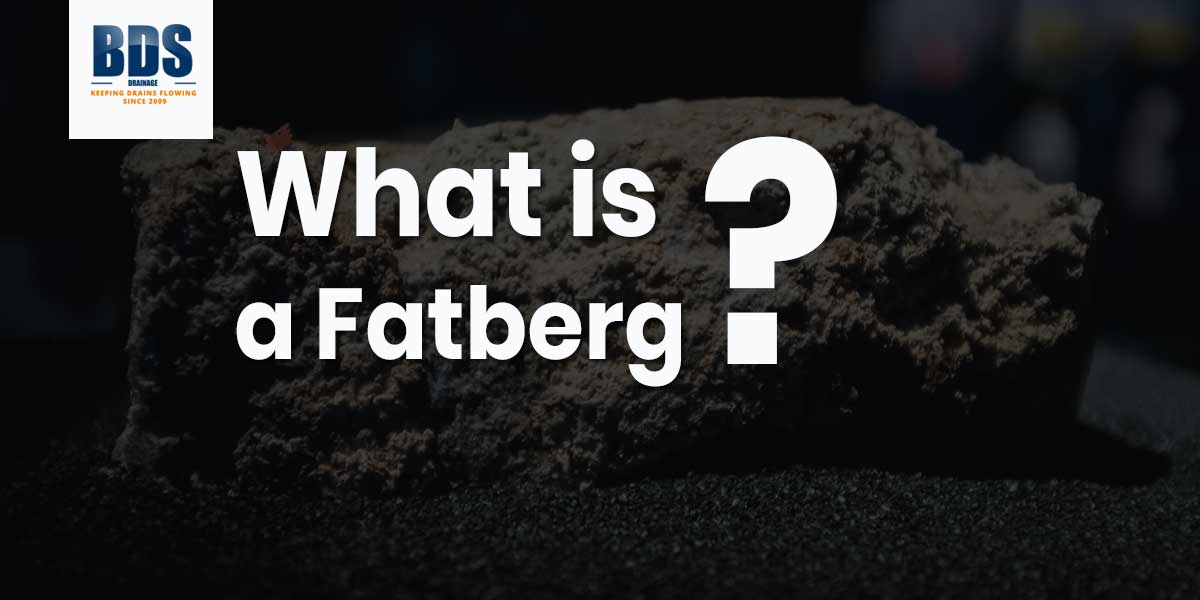 What is a Fatberg? Why is it Ruining Our Drains?

Icebergs are dangerous freshwater chunks that everyone is familiar with, because of how one of such pieces caused the titanic wreck. The new dangerous mass, just like an iceberg that many are not aware of are fatbergs.

With many drainage firms and utility companies spotting them in sewers, fatbergs are posing problems for marine life and our drainage systems.

This post focuses on what fatbergs are, why they cause ruins in our drains, and what can be done to prevent or remove them.

What is a fatberg?

A fatberg is a coagulated mass of congealed grease and non-biodegradable matter found in sewers and drains. Fatbergs are also known to be formed from flushed household items, such as wet wipes, cotton buds, condoms and sanitary pads. The resulting fat and debris mass can be very strong (almost like concrete) and may require special equipment to remove them from sewers and drains.

Rough sewer surfaces with turbulent fluid flow are the ideal sites where fatbergs form. Apart from the blockage that these coagulated masses can cause, they can also react with the linings of pipes and convert oil to a soap-like substance. A fatberg is one sewer mass to get rid of quickly.

How large can a fatberg get?

Depending on how long they have been allowed to accumulate fat and used items, fatbergs can weigh as much as 12 double-decker buses stacked on each other.

One of the biggest fatbergs in history was discovered in a London sewer and was ten times the size of the Kingston fatberg of 2013. The Whitechapel Fatberg, as it is popularly called, was measured to be 130 tonnes, and 250-metre-long (about the size of two football pitches). It took a little over three weeks to completely remove it from the drain, with eight workers pulling out 20 to 30 tonnes daily.

This fatberg is so popular that two pieces from it were on display in the Museum of London. A live camera also streamed the disintegration of the two Whitechapel Fatberg pieces from February to June 2018.

How to avoid fatbergs in drains?

The consequences of fatbergs are severe. Therefore, you must understand how to avoid these coagulated fat masses than to deal with them after they have caused damage.

Firstly, sewers and drains are only built to take three things; faeces, urine and toilet paper.

There are four things never to pour down a drain if you want to prevent fatbergs;

Oil and grease are the most common components of fatbergs that cause blocked drains and sewers. Cooking oil should never be thrown down the drain for whatsoever reason. Instead, oil and grease should be appropriately disposed of. Even when in liquid form, they can still cause serious harm.

The most efficient way to prevent grease and fat from going down your drain is to install a trap that will prevent FOG (fat, oil and grease).
If you do not intend to reuse your oil or grease, then follow these steps in disposing of it.

The easiest way to get your drain or sewer blocked is to put wet wipes or paper towels in it. With the scare of these items attaching to oil and grease, they have absolutely no place in a sewer.

Wet wipes are said to be flushable, but this may not always be the case. It is recommended that you dispose of your wipes in the waste bin instead.

Another thing that should not be thrown in a drain is any starchy food like potatoes, rice and spaghetti. Fatbergs usually contain non-biodegradable materials and starchy food can act as the connecting link to hold them together.

These materials that do not break down can cause a significant scare in sewers and drains. Always put coffee grounds and eggshells in your waste bins.

Some Notable Fatbergs and the Damage they have caused

Apart from the Whitechapel Fatberg that cost over £1 million each month to destroy, there have also been some notable fatbergs around the world. Some of them include;

1. The Fatberg in Kingston Upon Thames, London

On the 6th of August, 2013, a 15-tonne fatberg was discovered in southwest London. It consisted primarily of wet wipes and food fat and made many toilets in the area difficult to flush. It took almost six weeks to repair the sewage as it had been severely damaged.

2. The Fatberg in Shepherd’s Bush, London

This coagulated fat mass was discovered on the 1st of September, 2014 beneath a section of the road in Shepherd’s Bush, London. It was formed from wet wipes, waste fat, and unusual materials like wood planks and tennis balls. When measured, the Shepherd’s Bush Fatberg was about the same size as Boeing 747, a popular aircraft.

3. The Fatberg in Melbourne, Australia

Fatbergs can occur anywhere in the world. The drainage system in Melbourne Australia was blocked by a large mass of grease, fat and waste. It was discovered on the 3rd of September, 2014 and cost thousands of pounds to remove from the drain.

4. The Fatberg in Baltimore, Maryland

Under the streets of Baltimore in Maryland, a fatberg formed from wet wipes, waste and fat was discovered in September 2017. This particular fatberg caused a 1.0 imperial gallon spillage of sewage in the Jones Falls.

Also Read – How to Unblock a Drain?

5. In January 2016, a fatberg was found near New South Wales in Australia

It damaged the sewage pump system in the area and blocked several toilets. When weighed, the fatberg was 1.1 tonnes. It took well over four hours to remove the massive fat mass by crane.

It was said to be 120-metres long and quite difficult to breakdown or extract. The cost of removing the coagulated mass and repairing the sewer was estimated to be north of £500,000.

7. The Fatberg in Sidmouth, Devon

The largest fatberg to be discovered outside a major city in the UK was found in Sidmouth, Devon. When measured, it was 64 metres long and took workers two months to remove. The discovery was made in December 2018.

8. The Fatberg in Birchall Street, Liverpool

The largest fatberg in the UK was found in February 2019 at Birchall Street, Liverpool. It weighed over 400 tonnes and required special tools to break down.

If you cannot stop fats, grease and oil from going down your drain, then measures have to be taken to remove them when they eventually form fatbergs. The steps involved in this process include;

1. Breaking down the fatberg

If the fatberg in your drain or sewer is anything like those recently found in the UK, they will need to be broken down into smaller pieces first. Combination tankers that can deliver up to 4,000 psi of jetting pressures are used to breakdown the fat before any other action is taken.

Breaking down a fatberg makes it easier and safer to effectively and efficiently remove the entire fatberg from your drain.

2. Extraction of the liquid waste in the fatberg pieces

The liquid waste in the fatberg pieces are then extracted using a combination tanker. Manual excavations may also be employed to ensure that the job is completed effectively.

3. Disposal of the waste

It is an entire waste of time if the waste is transferred to another place where they can reform. Therefore, it is essential that fatbergs are safely disposed of. Since they may contain impurities and harsh toxins, liquid waste from fatbergs should also be locally exported to waste depots.

Not every fatberg component should be disposed of. In fact, most fatbergs are a good source of fuel. Liquid fat can be gotten from a melted sludge, and the debris contained in this congealed mass can be separated from the oil. After separation, the oil can be reprocessed and combined with other chemicals to form biodiesel or biogas.

A significant portion of the Whitechapel Fatberg was converted into this sustainable source of fuel.

At this point, the work is completed. However, after-care services need to be administered to prevent the reformation of fatbergs. A CCTV survey is the standard service employed to check the sewer for traces of oil, grease, fat, wet wipes or other household items.

Fatbergs are becoming growing concerns for communities in the UK, and especially in London. The size of these congealed mass of fat and non-biodegradable matter seems to be increasing with every discovery.

To prevent exuberant costs from repairing a damaged sewer and removing fatbergs, it is essential that you know how what they are and what causes them.