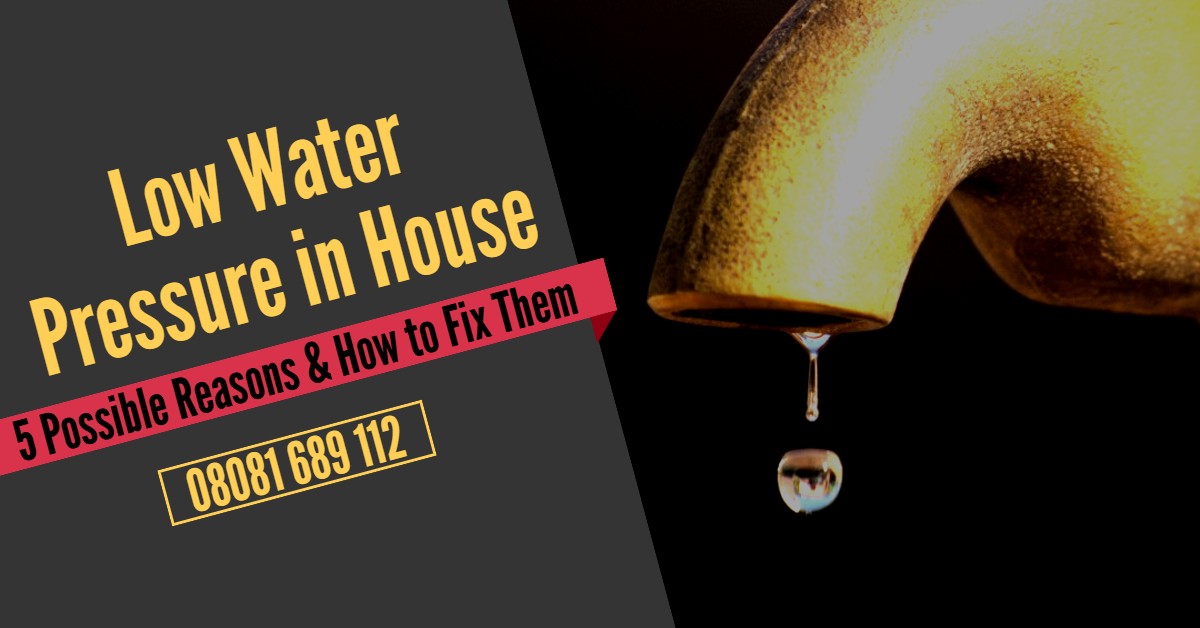 Low Water Pressure in House: 5 Possible Reasons & How to Fix Them

A lack of water pressure (low water pressure) can be frustrating. Baths may take longer to run. Your toilet tank may take ages to fill up after flushing. Washing machines and dishwashers may have to be put on longer cycles. Sometimes low water pressure may only affect one appliance, however if it’s affecting the whole house, it may be time to intervene.

Here are a few reasons why your water pressure may be low and how you can up the flow again.

The main shut off valve is located by your water meter and allows all water into your house. This is operated by a simple lever. It’s possible that the last person to use it didn’t pull the lever fully leaving it semi-closed. Save yourself from having to call a plumber in to pull a lever by giving this a check first. A PSI of 45 to 55 is what you want to look out for – do not let it exceed 80 otherwise this will damage faucets and washers.

Another important valve to check is the exterior one connecting your home to the grid. You most likely won’t be allowed to touch this as it belongs to your local council, however if you’ve recently had a repair or have had flooding problems on your street, it’s likely a council hired plumber may have left the valve slightly open.

Get in touch with your local council to try and address the problem. It could even be worth seeing if people on your street have been receiving a lower water pressure too – the problem may lie higher up the street at another valve.

It’s possible there could be a blockage in one of the pipes. This is common with old iron pipes, which can start to build up with limescale and rust. You’ll generally notice this if water pressure has been slowly reducing over time.

Sadly this is not an easy job and may involve replacing large sections of piping with a more modern and durable material. This can be expensive and many people may hold off replacing piping until the water coming out of their taps is barely a dribble. Copper piping is the best for the job, but is expensive. If you’re looking to cut your costs, plastic alternatives such as PEX could be ideal.

Low Water Pressure – You May Live in a Low Pressure Area

If the pressure has always been low since you moved in, you may simply live in a low pressure area. You might live at the top of a hill or far away from external water mains.

Fortunately you don’t have to live with such low pressure and buying a pressure regulator to boost the flow of water could be the option. These can take the form of electric pumps and pressure tanks and can sometimes be bought from home stores.

Alternatively, you can find them online from many suppliers. A professional will be able to install such a device to have the best impact on your home.

In some cases, the regulator may even have the opposite effect and create a pressure spike, causing too much water pressure. As previously mentioned, this can be damaging to your piping, wearing down faucets and washers that were not built for such pressures.

A plumber may be able to fix a regulator, but it may be just as easy and just as costly to buy a replacement. It’s likely that the regulator was old and wore down through natural excessive use. A new electric pump is likely to last longer, although you can expect a cheaper model to wear out quicker than a top end one.