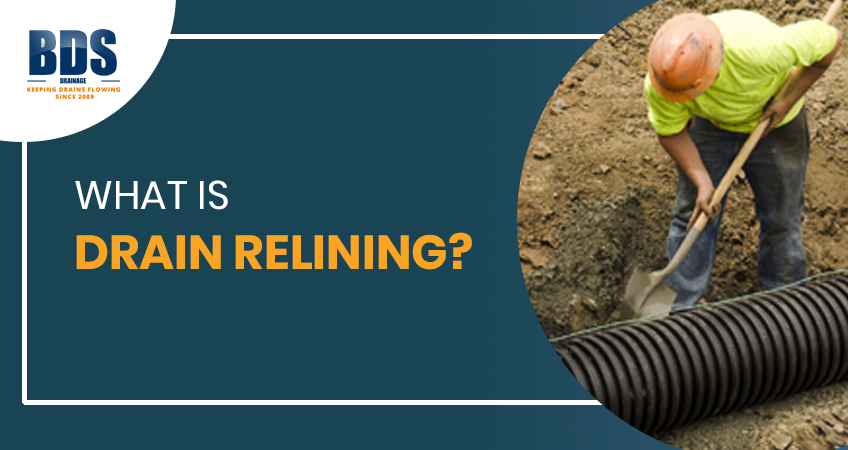 What Is Drain Relining?

As drainage related problems go, damaged drain pipes rank among the most bothersome of the lot. Apart from the fact that they are notoriously tricky to detect at the outset, leaky drain pipes also damage the environment by polluting the soil.

In the past, the only way to fix damaged drain pipes was the long and expensive process of excavation and replacement. This was a notoriously difficult process as more often than not, the damaged pipes were usually buried metres under the ground. Sometimes buried under infrastructure like roads, driveways or retaining walls.

Today, however, thanks to modern technology, drainage pipes can be fixed via the relatively easier and cheaper method known as drain relining.

What Is Drain Relining?

Drain relining is a method of repairing damaged drainage pipes by fixing a new pipe called a lining, into an existing damaged pipe without resorting to the traditional method of excavation. It is a form of No-Dig repair Technology which utilises a form of drain sleeve similar to glass reinforced plastic.

Drain relining can be used to fix open or leaking joints and circumferential or radial cracks caused by blockages. It is also very effective in combating root intrusion which old clay drainage pipes are most susceptible to.

Closely related to relining, is a process known as a drain patch repair. Here, unlike relining where the pre-shaped pipelining is used, the main material is a drain patch. The patch is spread out and filled with epoxy resin and wrapped around a tool known as a pipe packer. The packer is then slowly and carefully inserted into the waste drain to the point of the defect and inflated. It is left for an hour before it is finally removed.

Drain patches are particularly effective where only a small section of the pipe is damaged as there is no need for a full relining.

The process of drain lining begins with the inspection of drainage pipes. Unlike the old method of drain replacement which involves excavation of pipes, the drain relining process makes use of CCTV survey technology. This inspection determines the location and extent of any damage to the pipes.

After the inspection, the pipes are cleaned to prevent any obstruction during the relining. The intrusions (tree roots for example) are removed using a robotic cutter which can cut through even steel and concrete. After this, a high-pressure water jetter is used to clear the pipe of any debris. This ensures a good bond on the pipe wall.

Before the new drain liner is fixed, the pipes are inspected once again to ensure all possible intrusions have been removed.

The method of relining as well as the exact amount and type of pipelining needed is decided at this stage. This is because different types of liners are used in different situations. More flexible liners, for instance, are used in cases where the pipes are curved as manoeuvrability is required.

The installation process can be done in two ways. The first is by a process known as inversion. Here, a resin is poured into the drain liner and repeatedly rolled to ensure it is evenly distributed on its body. It is then inserted into the damaged pipe by using inflated airbags to shape the lining to the pipe walls or by using water pressure.

It could also be installed via GFRP UV pipelining. Here, the pipelining is pulled into the damaged pipe by using cables and winches.

Both methods ensure the lining is perfectly fitted to the surface of the pipe. This guarantees effective drainage.

After installation, comes the curing process. This involves the hardening of the resin to ensure the lining stays in place. When installing via inversion, it can be left to cure by itself, or sped up by running hot water through the pipe. GFRP UV pipes, on the other hand, require UV lighting to cure the lining to full hardness.

After the damaged section of the drainage pipe has been fixed, one final inspection is carried out to ensure the pipe is as good as new. This involves visual inspections with CCTV surveys and checks for leaks with leak detection equipment.

Drain relining boasts many unique advantages over the old method of excavation and replacement. They are.

As pipelining requires few machines and no excavation, it can be done without lengthy disruption of daily activities. In fact, it can be done around business trading or shift times. This leads to minimal downtime.

This is especially useful in cases of emergency repairs of sewer or stormwater drains.

The lining used in the process aids water flow as it is designed with a low friction surface.

The inspection process via CCTV survey locates all possible cracks within the pipe that may have been otherwise missed. Thus, even areas where no leaks are observed are attended to.

Drain relining ensures permanent structural integrity as the pipelining usually has a durability of over 50 years. This is most beneficial to clay drain pipes.

The flexibility of some types of lining allows it to negotiate bends easily.

Pipes of all sizes can be fitted with lining from as small as 50mm in diameter to over a metre.

The nature of the environment or accessibility of drains is not an issue in drain relining. This is because relining can be done using one long lining or several smaller overlapping sheets. It is noteworthy that a single lining can reach lengths of over 500 metres.

In addition, it is also important that pipe relining cost metre in the UK is influenced by the particular city. For example, cities with higher costs of living like London and Manchester would have higher drain pipelining costs than small counties like Hertfordshire and Bedfordshire.

When To Reline Drain Pipes

Knowing the exact moment pipes get damaged and become due for repair is unfortunately impossible. This is because most pipes are buried underground, far from the reach of detection by casual observation.

There are, however, few signs to watch out for to know when pipes are due for relining. They are:

Leaky sewage lines eventually lead to dour odours in the air, and this is usually the first sign that you have a drainage problem. Such odours are caused either by waste products themselves or by mold and mildew which thrive in damp spots.

The constant sound of running water is often is a sure sign of trouble in the sewer line. If the sound persists when all faucets are turned off, then the sewer line is due for relining.

Wet floors are also a dead giveaway for leaking drainage pipes. Most plumbing networks weave directly underneath the house to connect to the main sewer line. As for leaking water pools around these lines, it eventually affects the floors and can discolour interior flooring if left unattended.

Vermin such as rats are attracted to the putrid odours of leaking sewer lines in waste drains. Thus, their presence in your yard is usually an indicator of drainage pipes in need of relining.

A spike in your water bill is sometimes directly related to damaged pipes. In order to be sure, turn off all water sources and observe the reading of the metre.

Other signs to watch out for are clogs, rust or debris in the water, cracks in walls, an unusual growth in vegetation and presence of sludge in the tub or shower.

As explained earlier, broken pipes allow harmful chemicals leach into the soil and groundwater. Over time, this could pose serious hazards to not only the plant and animal life but to humans as well. Excavation of pipes causes further harm to the environment as extensive damage is done to buildings, fences, trees, and gardens. It could also aggravate the condition of the leakage as more often than not; the excavation equipment may rupture the already damaged pipes. And where such pipes contain toxic chemicals, they are released faster into the soil.

Drain relining is, however, eco-friendly as the resin and lining in most instances are first certified to be environmentally friendly before being used commercially.

In addition, the process is perfect for sensitive areas such as streams and rivers and is also less likely to damage existing infrastructure.